Last week, I attended the inaugural Facilitation Shindig, run by the fabulous Julie Drybrough (in the group pic above, you can spot her at the right end of the front row).

It was a get-together of a whole range of folks who get involved in facilitation in the workplace, in some form or another.  As we went around the room introducing ourselves, it seemed to me we fell into a number of different backgrounds. I tried to capture them just out of interest and summarised them as in the image to the left (the folk who were there may disagree with my categorisations – it was just an off the cuff thing!).

We kicked off the session with introductions and as part of our check-in, Julie posed the question: what is important to you when you facilitate? I realised that, for me, the answer is really quite simple (but, as is ever the case, quite complicated to achieve!): it is being useful to the people in the room and – as far as you can – making sure stuff happens afterwards. At the very least, you can show people that there can be a change from what was before.

When people get together in a room, there will usually be a compelling reason for them to do so (if there isn’t, you should probably start by asking what the value of you all getting together is!). Maybe there is a need to create something together, build a team or new relationships or to fix something that has gone wrong. 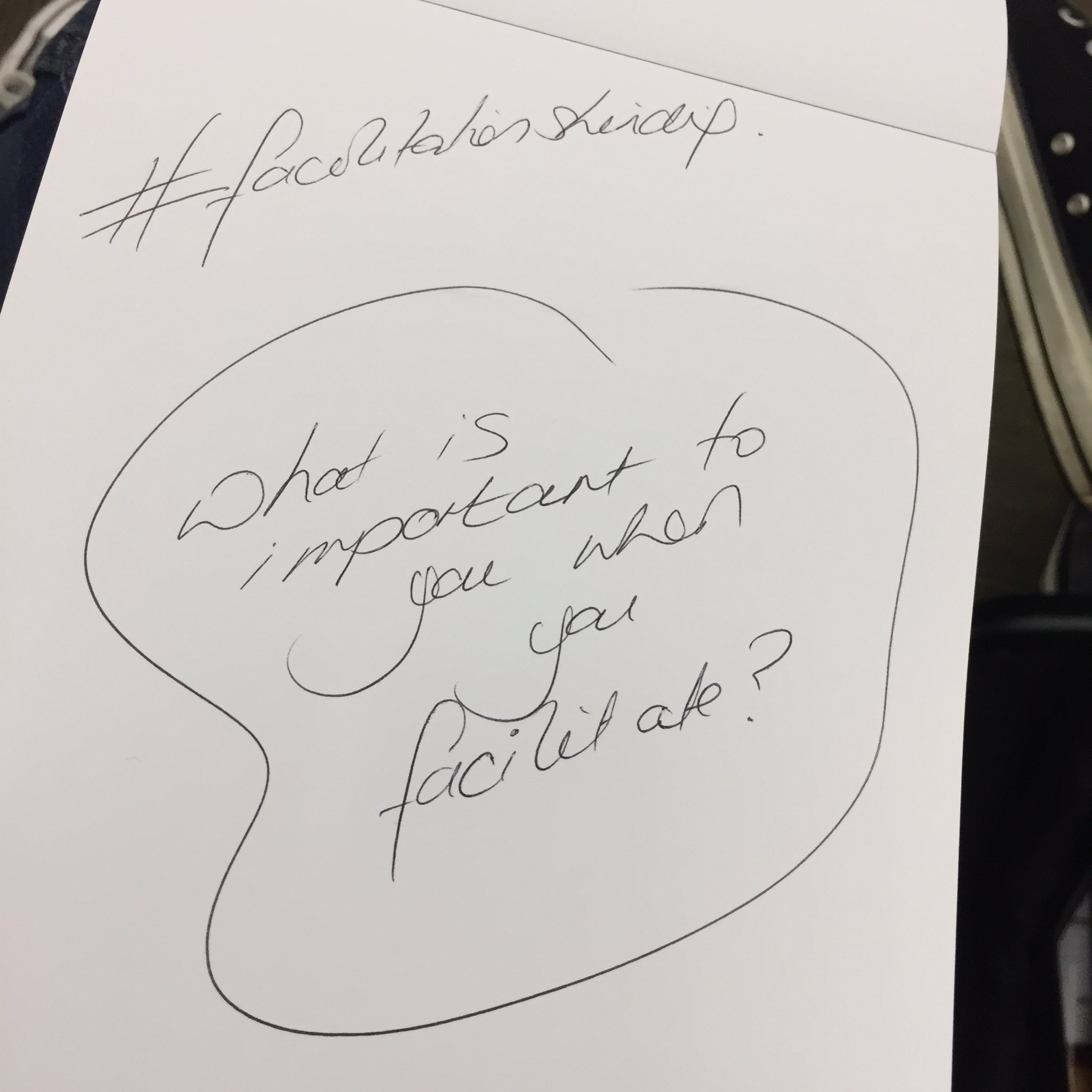 I imagine we have all been to conferences and events that never leave the room.  By that I mean that the content is interesting, thought-provoking, even enjoyable, but follow-up action never happens and ultimately in hindsight it was just a day out of the usual routine.  Even with the best of intentions or the healthiest of budgets, nothing changed – or even if it did, that thing the people came together for isn’t sustained.  Quickly, practice reverts to what it was before.

As an example, I was talking to a friend who works in HR recently. They told me a (familiar) story about a company that had invested a whole heap of time, energy and money in a leadership development programme.  You know the kind of thing: off-site days in fancy hotels, expensive facilitators and coaches, involving every single manager in a global organisation. But the fancy hotel was nothing like the workplace (who’d have thought it?). There wasn’t enough space given for reflection or for identifying actions – the expensive facilitators delivered their off-the-shelf stuff off their shelves.  But there was no transfer back to the day job and no changes of any lasting significance were made.

So, what is important to me about facilitation is the doing after the day.  Making that event leave the room, making it meaningful, making a difference: not just on the day itself, not just for the smiles on the happy sheets but afterwards – when it really counts. The Facilitation Shindig did that for me and I hope I do it in the events I facilitate.

This site uses Akismet to reduce spam. Learn how your comment data is processed.